When I refer to damp valentine, I am talking about the WEATHER not my partner, (between you and me though he is a bit sappy). Anyway, as you already know my Mr Tech guy, took me to Cardiff for the weekend, a lovecation if you will (did you check out the song btw? Pretty good right?). He came to pick me up at about 9:30 in the morning, (I was as disgusted as you are right now), and we exchanged gifts – spoiler Instagram ads meant we got each other the same thing 😂.

The first stop we made was three minutes down the road to SPAR for a bacon butty, I HAD already made the famously nostalgic toast in tinfoil for the journey but my sweetheart is a tech guy and I am sure they only survive off junk food, so the tele has told me anyway. We made a few toilet trips on the way so all in all it took about four and a half hours to get there.  So we get there and you know it had been raining all day but it is the UK, so we are used to it at this point, my hair is a complete frizz-fest because of the rain so I’ve had to re do my hair and makeup completely at the hotel, then we set off (on foot -  in the rain – in the cold – wearing a dress – and toeless heels) to The Alchemist, god forbid the tourists don’t go to a chain restaurant, you can’t change us that much.

The Alchemist is pretty popular for cocktails because they have all those fancy chemistry acts to go with them, but the food there was actually really good (bar the chips). I would say we did three course’s but I won’t lie we had two starters each and then a main and then a dessert. I think we have the eyes bigger than your belly problem. The dessert was really good, you know it is about to be good when they set it on fire for you. So, we leave there, Mr Tech guy is still crying from the bill ☹️ and we go down to a cocktail bar which was good, but we were definitely ready for bed at about 8pm that day, don’t judge it was a long day.  The Saturday we wake up unnaturally early – 8am – and he makes me walk – for forty minutes - in the rain – unfed – in the cold – in high heeled boots – to a chain café – after we had passed about five Greggs a Wetherspoons and TWO of the café’s chains that we were heading to, for a bacon and sausage butty. Hangry was the word that came to mind. After he had sorted out my hanger problem, we did a little bit of shopping and almost went to a local restaurant for lunch then went back to the hotel and did a little swimming. By swimming I mean Mr Tech guy couldn’t keep his hands off me and carried me down the length of the pool a few times. Then we went to the bar in the hotel were they made this banging salted caramel espresso martini, it was that good I had to share it with my clothes. My brain just wasn’t really registering that I was supposed to be drinking but there was still nothing in my mouth until it clicked that my clothes were now wet. My brain did however register the massive amounts of judgement from Mr Tech guy as he just watched and LET me do it, didn’t even offer to help either smsh. Anyways, he took me down to the docks (via uber - the Lord had mercy on me that night), and we walked all the way down to the bar at the end but Mr Tech guy chickened out of going in he thought it was going to be some kind of movie local bar scene where they pull out guns and stuff. So, we walked back, and went to the pub that was literally called The Dock, - I know somewhere that wasn’t a chain how unlike us. It was really nice actually and oh my days the waiter, if you think my writing style sometimes looks like I am a bit much you should have seen this guy, he was a very happy person (so he seemed anyway).

So, I think Sunday is going to have to be another time as Sunday has the effects of Storm Dennis in it and a wonderful photo that I keep for pure enjoyment when I am sad, (pray Mr Tech guy doesn’t refuse the use of it.) 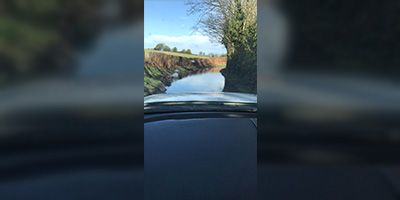 Good evening Niamhers (I made a mix of Niamh and readers, you are all officially my Niamhers, Congrats!). So last time I finished with a promise to tell you all

Boy oh boy, do I have a lot to tell you. Okay so firstly, Penny’s fixed – phew. She did fail the first MOT on a tyre and the wishbone